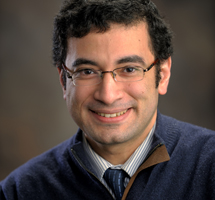 Assistant Professor, Department of Civil and Environmental Engineering at the University of Illinois

Title: Topology, Geometry, and Fracture in Networked Materials: A tale of Scales

Abstract: The skeleton of many natural and artificial structures may be abstracted as networks of nonlinearly interacting elements. Examples include rubber, gels, soft tissues, and lattice materials. Understanding the multiscale nature of deformation and failure of networked structures hold key for uncovering origins of fragility in many complex systems including biological tissues and enables designing novel materials.

I will start by an overview of our prior work on modeling polymer chains with sacrificial bonds and hidden length; a topological feature that was previously hypothesized to be responsible for increased toughness and fracture resistance in animal bone. Our model combines nonlinear entropic elasticity with transition state theory for bond breakage and formation to predict rate dependence and time dependent healing in these systems in the quasi-1D limit. I will then introduce an extension of this model  to a discrete 2D setting (at the scale of 10s of microns) that enables exploring interplay of topological and geometrical features such as coordination number, cross linking density, and disorder with mechanical deformation and fracture. Specifically, we identify a non-monotonic rate dependence of the reaction force and dissipated energy as well as a transition in mode of failure from diffusive to localized with increased pulling rate. Furthermore, we show that networks with small-world architectures, balancing clustering and average path length, may lead to an optimum fracture toughness.

To generalize our results to larger scales relevant for engineering and material science applications, I will discuss our recent efforts in adopting an extended version of the Quasi-Continuum (QC) method to studying polymer networks across scales. In regions of high interest, for example near defects or cracks, each polymer chain is idealized using the worm like chain model. Away from these imperfections, the network structure is computationally homogenized, using Hill-Mandell’s principle, to yield an anisotropic material tensor consistent with the underlying network structure. Dynamic adaptivity provides a seamless transition across the two models. Overall, the proposed method provides a multi-resolution capability by retaining explicit representation of small scale heterogeneities and topological features, where they matter near the crack tips, while still accurately accounting for bulk elasticity and loading. We show several examples verifying our approach and illustrate the potential of the method for testing the influence of small scale features in controlling the macroscopic response.  We discuss the implications of our findings for the analysis and design of tough networks.

Bio : Ahmed E. Elbanna holds a Ph.D. in civil engineering (2011) and an M.S. in applied mechanics (2006), both from CALTECH, and an M.S. in structural engineering (2005) and B.S. in civil engineering (2003) from Cairo University. He was a postdoc in Physics at UCSB (2011-2012). He joined UIUC as an assistant professor of Civil and Environmental Engineering in 2013 and he currently leads the Mechanics of Complex Systems Laboratory. Elbanna’s research focuses on problems in theoretical and applied mechanics of solids, in the presence and absence of pore fluids, with special emphasis on fracture, deformation and wave propagation problems as they arise in geophysics, soft materials, and material design. He is a fellow of National Center of Supercomputing Applications, a faculty affiliate of Beckman Institute of Advanced Studies, a recipient of NSF Faculty Early CAREER award, and the recipient of Journal of Applied Mechanics best paper award (2019).