On Friday, November 6 at 2:00 PICS will be hosting a virtual colloquium featuring Ken Kamrin, Associate Professor of Mechanical Engineering at the Massachusetts Institute of Technology. 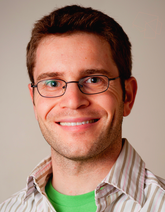 Abstract: Fluids and solids tend to be addressed using distinct computational perspectives.  Solid deformation is most commonly simulated with Lagrangian finite-element methods, whereas fluid flow is amenable to Eulerian-frame approaches such as finite difference and finite volume methods.  Problems that mix fluid and solid behaviors simultaneously present interesting numerical challenges.   Here we focus on fluid-structure interaction (FSI) problems, and discuss an emerging method called the Reference Map Technique, which allows us to simulate deformable solids on a fixed Eulerian grid.  The key is to store and update the reference map field on the grid, which tracks the inverse motion.  Using this technique to represent the solid phase, we can solve all phases of an FSI problem on a single fixed grid using fast update procedures very similar to those used in two-phase Navier-Stokes fluid simulations.   Various solid constitutive behaviors can be used, such as nonlinear elasticity and plasticity.  Systems of many submerged and interacting solids can be simulated, and, by activating the solids internally, we can simulate systems of “soft swimmers”.  Incompressibility and rigidity constraints can be applied in all phases by adopting Eulerian projection approaches commonly used in CFD.  The addition of the reference map field to the grid also presents certain benefits when computing level-set interface advection, including a procedure to guarantee mass conservation.

Bio: Ken Kamrin received a BS in Engineering Physics and a minor in Mathematics at UC Berkeley in 2003, and a PhD in Applied Mathematics at MIT in 2008. Kamrin was an NSF Postdoctoral Research Fellow in the Harvard School of Engineering and Applied Sciences before joining the Mechanical Engineering faculty at MIT in 2011, where he was appointed the Class of 1956 Career Development Chair. Kamrin’s research focuses on constitutive modeling and computational mechanics for large deformation processes, with interests spanning elastic and plastic solid modeling, viscous and non-Newtonian flows, amorphous solid mechanics, and analytical methods for fluids and solids. Kamrin has been awarded fellowships from the Hertz foundation, DOD, and NSF. and has received the 2010 Nicholas Metropolis Award from APS, the NSF CAREER Award in 2012, the 2015 Eshelby Mechanics Award for Young Faculty, the 2016 Ruth and Joel Spira Teaching Award from MIT School of Engineering, and the 2016 ASME Journal of Applied Mechanics Award. He is on the Board of Directors of the Society of Engineering Science.