On Wednesday, August 5 at 12:00 PICS will host an Alumni Spotlight featuring Ololade Fatunmbi of the Radhakrishnan lab. 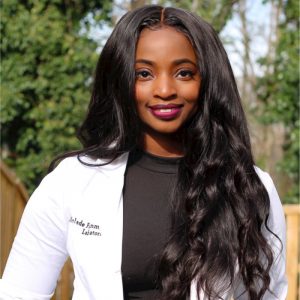 Ololade Fatunmbi, PhD  is a program scientist/scientist consultant for the U.S. Department of Defense.  In her role she provides scientific expertise in biophysics, data analytics, and programmatic guidance, in advancing the Department of Defense’s (DoD) basic research portfolio. She works closely with the DoD S&T leadership in the Office of the Secretary of Defense and across the Services, as well as academia to assist the Basic Research office in setting scientific priorities aimed toward ensuring DoD is a leader in scientific discovery and identifying new paths for investigation.

Prior to joining the Department of Defense, she worked as a Foreign Affairs Officer at the Department of State. In her role as a science diplomat at the Department of State, she worked on advancing priorities in science and technology cooperation between the U.S. and Japan. Dr. Fatunmbi has held positions as an AAAS fellow for the National Science Foundation and as postdoctoral researcher at the University of Pennsylvania studying the mechanical properties of liver cancer under the supervision of Professor Ravi Radhakrishanan and Paul Janmey. Dr. Fatunmbi is involved with a diverse set of entrepreneurial expenditures, varying from biotechnology to the fashion industry.  She received her PhD and BS in chemistry from the University of Massachusetts Amherst and Lincoln University, respectively. Dr. Fatunmbi has won numerous awards including a Global Innovation Fellow Award in 2017, and has been selected to orally present her research in various conferences such as Biophysical Society in 2019.