The Bassani Group has a paper out in the Journal of the Mechanics and Physics of Solids: “Exploiting interface patterning for adhesion control.”

Surface force-mediated adhesion, e.g. via van der Waals forces, is critical for direct bonding of bulk solids in the absence of chemical bonding or an adhesive layer. However, no two surfaces are ideally flat or perfectly conformal due to surface roughness or intentional patterning. When adhered, non-zero surface tractions arise wherever the local separation of the interface differs from its intrinsic equilibrium separation, inducing regions of tensile and compressive stresses. A fundamental understanding of such imperfect adhesion is important and unlocks opportunities to control interfacial strength and toughness in various applications including MEMS/NEMS, micro-transfer printing, and processes to manufacture advanced 3D integrated-circuits. This paper investigates the fundamentals of direct adhesion of non-conformal surfaces by examining the interplay of the (i) intrinsic traction-separation relation (TSR), (ii) interface topography, and (iii) elastic properties of the adhered bodies. The TSR adopted accounts for strong repulsion when the interface separation is less than the equilibrium separation, and only the normal surface tractions are considered. The effective TSR properties, including the overall adhesion strength and work of separation, are determined from numerical calculations. Simple closed-form solutions are obtained for rigid bulk solids. A finite element model utilizing cohesive elements in a periodic cell is constructed to study cases with non-uniform deformation in the elastic solids.

Professor Danielle S. Bassett, working with the Max Planck Institute for Dynamics and Self-Organization has published a paper…
byKatherine Thompson 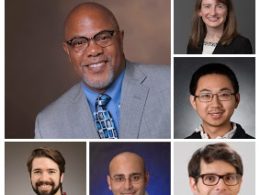 While it’s impossible to predict how this fall semester will go, PICS has put together a full roster of…
byKatherine Thompson