Title: Molecular Simulation and Machine Learning as Routes to Exploring Structure and Phase Behavior in Atomic and Molecular Crystals

Abstract:  Organic molecular crystals frequently exist in multiple forms known as polymorphs. Structural differences between crystal polymorphs can affect desired properties, such as bioavailability of active pharmaceutical formulations, lethality of pesticides, or electrical conductivity of organic semiconductors. Crystallization conditions can influence polymorph selection, making an experimentally driven hunt for polymorphs difficult. Such efforts are further complicated when polymorphs initially obtained under a particular experimental protocol “disappear” in favor of another polymorph in subsequent repetitions of the experiment. Consequently, theory and computational can potentially play a vital role in mapping the landscape of crystal polymorphism. Traditional crystal structure prediction methods face their own challenges, and therefore, new approaches are needed. In this talk, I will show, by leveraging concepts from mathematics and statistical mechanics in combination with techniques of molecular simulation, traditional methods, and machine learning, that a new paradigm in crystal structure prediction may be emerging. Examples demonstrating prediction of structures of crystals, co-crystals, and phase transitions will be presented.

Bio: Mark Tuckerman obtained his B.S. in physics from the University of California at Berkeley in 1986 and his Ph.D. from Columbia University in 1993, working in the group of Bruce J. Berne. From 1993-1994, he held an IBM postdoctoral fellowship at the IBM Forschungslaboratorium in Rüschlikon, Switzerland in the computational physics group of Michele Parrinello. From 1995-1996, he held an NSF postdoctoral fellowship in Advanced Scientific Computing at the University of Pennsylvania in the group of Michael L. Klein. He is currently Professor of Chemistry and Mathematics at New York University.

His research interests include the use of theoretical and computational chemistry techniques to study proton and hydroxide transport in bulk and confined hydrogen-bonded liquids and hydrogen diffusion in nanoconfined materials, the development of large time-step molecular dynamics and machine learning algorithms and free-energy based enhanced sampling tools for predicting the conformational equilibria of complex molecules and the exploration of structure and polymorphism in molecular crystals, and development of machine learning models in density functional theory and statistical mechanics.

Honors and awards include the Japan Society for the Promotion of Science Fellowship, the Friedrich Wilhelm Bessel Research Award from the Alexander von Humboldt Foundation, the Camille Dreyfus Teacher-Scholar Award, an NSF CAREER Award, and the NYU Golden Dozen Teaching Excellence Award, the Sentinels of Science Award from Publons, the Andreas C. Albrecht Lectureship from Cornell University, and the Institute Lectureship from the Indian Institute of Technology, Kanpur. 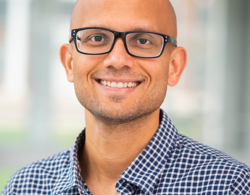