On Friday, October 23 at 2:00 PICS is hosting a colloquium featuring Professor Michael Graham, Steenbock Professor of Engineering and Harvey D. Spangler Professor at the College of Engineering at the University of Wisconsin-Madison. 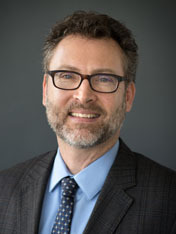 Abstract: Many complex nonequilibrium systems, including turbulent flows, are characterized by chaotic dynamics, a large number of degrees of freedom, and hierarchical, multiscale structure in space and time. In two vignettes, we describe some recent work aimed at developing and applying machine learning and data science tools for systems displaying these characteristics.

The first vignette builds on the idea that while partial differential equations are formally infinite- dimensional, the presence of energy dissipation drives the long-time dynamics onto a finite-dimensional invariant manifold sometimes called an inertial manifold (IM). We describe a data-driven framework to represent chaotic dynamics on this manifold and illustrate it with data from simulations of the Kuramoto-Sivashinsky equation. A hybrid method combining linear and nonlinear (neural-network) dimension reduction transforms between coordinates in the full state space and on the IM. Additional neural networks predict time evolution on the IM; this can be done in either the discrete-time (difference equation) or continuous-time (ordinary differential equation) setting. The formalism accounts for translation invariance and energy conservation, and substantially outperforms linear dimension reduction, reproducing very well key dynamic and statistical features of the attractor.

The second vignette addresses how to represent flow or other fields with multiscale structure. We describe a method, inspired by wavelet analysis, that adaptively decomposes a dataset into an hierarchy of structures (specifically orthogonal basis vectors) localized in scale and space: a “data-driven wavelet decomposition”. This decomposition reflects the inherent structure of the dataset it acts on. In particular, when applied to turbulent flow data, it reveals spatially localized, self-similar, hierarchical structures. It is important emphasize that self-similarity is not built into the analysis, rather, it emerges from the data. This approach is a starting point for the characterization of localized hierarchical turbulent structures that we may think of as the building blocks of turbulence. It will also find application to other systems, such as atmospheres, oceans, biological tissues, active matter and many others, that display multiscale spatiotemporal structure.

Professor Graham’s research interests include the rheology of complex fluids; blood flow in the microcirculation, swimming microorganisms; and nonlinear dynamics and turbulence in Newtonian and complex fluids. He is author of two textbooks: Microhydrodynamics, Brownian Motion, and Complex Fluids (2018) and Modeling and Analysis Principles for Chemical and Biological Engineers (2013, with James B. Rawlings).

Among Professor Graham’s professional distinctions are the Best Student Paper Award from the Environmental Division of AIChE in 1986, a CAREER Award from NSF in 1995, the François Frenkiel Award for Fluid Mechanics from the American Physical Society Division of Fluid Dynamics (APS/DFD) in 2004, Fellowship in the APS in 2011, the Kellett Mid-Career Award at UW-Madison in 2012, the Stanley Corrsin Award from APS/DFD in 2015, and a 2018 Vannevar Bush Faculty Fellowship from the US Department of Defense. He has presented many named and plenary lectures, including the inaugural William R. Schowalter Lecture at the 2019 AIChE Annual Meeting.

Professor Graham has been involved in many professional service and leadership activities. For example, he was an Associate Editor of the Journal of Fluid Mechanics from 2005-2012 and Editor-in-Chief of the Journal of Non-Newtonian Fluid Mechanics from 2013-2015, where he continues to be a member of the Editorial Board.   Professor Graham is President of the Society of Rheology.