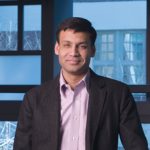 Statistical mechanics of filamentous molecules:
Recent single-molecule experiments have focused on the mechanics of torsional buckling and plectoneme (super-helical structures) formation in DNA by subjecting it to the simultaneous action of a force and a torque. A mechanics-based interpretation of this type of experiment is important because forces and torques exerted by the DNA enter into kinetic models of molecular machines like helicases and topo-isomerases which manipulate plectonemes. We developed a model to interpret data from this experiment by viewing DNA as a fluctuating elastic rod, and generated quantitative predictions for the pre- and post-buckling behavior. We have also used similar theories to accurately calculate the magnitude of Brownian fluctuations of an actin filament as a function of the position along it for given loading and mechanical properties. Such a calculation is relevant since the quantification of molecular fluctuations is an important step in determining the binding state of myosin motors that walk along actin filaments. In similar work done in collaboration with Rob Phillips and Philip Nelson, we have shown how the bending and twisting behavior of DNA determines the forces necessary to package bacterial viruses, and the regulation of certain genes in bacteria. In all our models the macromolecules are assumed to have homogeneous elastic properties, an assumption that is not necessarily true. The focus of our current research is to develop efficient methods to deal with heterogeniety in mechanical properties of fluctuating filaments and apply it to problems, such as, forced unfolding of proteins.

Kinetic models for unfolding proteins:
Mechanical unfolding of proteins is known to contribute to deformation and mechano-sensing in cells, deformation and load bearing characteristics of muscle, and protein degradation and import in vivo. A deeper understanding of these processes can be garnered by performing force-extension measurements on proteins in an AFM. Such experiments are typically interpreted either with models that do not acknowledge the difference in properties of the folded and unfolded regions, or through Monte Carlo and Molecular Dynamics simulations. In contrast to these methods, we develop mathematical models for the mechanical unfolding process that account for heterogeneity and kinetics of the unfolding/folding reactions, and still tackle the problem largely analytically. This allows determination of the mechanical and kinetic properties of a protein from a few force-extension traces, without having to resort to simulations. Currently, we are using this approach to model the mechanical response of intermediate filaments, such as, vimentin, that are responsible for stabilizing the shape of cells and participate in signaling interactions with the extra-cellular matrix. We also use similar methods are to look at phase transitions in DNA.

Mechanical response of filamentous networks:
Filamentous proteins such as actin or vimentin do not function in isolation; they are part of a cytoskeletal network that supports a cell mechanically in much the same way as a beam frame supports a building or a bridge. Understanding the mechanical response of this network is important since many processes, such as, adhesion, migration and even differentiation of cells are known to be mediated by mechanical stimuli. The mechanical response of the network is dominated by the interplay of elastic and entropic forces, which themselves are determined by network variables, such as, filament density, cross-link density, type of cross-linking protein, etc. To model the network mechanical behavior we propose to use the finite element method by which the response of the whole network can be determined once the elastic properties of the individual filaments are known. This leaves the entropic part of the response which can be evaluated analytically by integrating over all possible configurations and expressing the result in terms of a determinant of the stiffness matrix. Incorporating heterogeneity in the finite element setting becomes merely an exercise in assigning different elastic stiffnesses to each element and is easily accomplished. On the other hand, simpler analytical approaches that already exist in the literature are only applicable for networks with one type of filament or for special geometries, and we have used them to model isotropic fibrin networks in blood clots. In particular, we have shown how protein unfolding can lead to unusual mechanical behavior in fibrin networks.

Mechanics of constrained lipid membranes:
The shapes of cells in blood flow or under the action of forces during locomotion (due to growing filamentous proteins) are examples of problems where the lipid bilayer membrane bounding a cell is subject to kinematic or dynamic constraints. The shape of the lipid bilayer is the observable of interest in experiments mimicking these phenomena since the local curvature of the membrane determines the forces it exerts on its environment. We develop methods to efficiently calculate the shape of membranes under various constraints. Recently, we have analytically calculated the shape of a lipid vesicle with a growing filament inside it, and shown that the calculated shapes possess features seen in experiments. We have also collaborated with specialists in scientific computation to establish stability of some equilibrium shapes under small perturbations. Our future research in this area will focus on constructing a mathematical model to understand invaginated membrane shapes as seen in the inner bilayer of organelles, such as, mitochondria.